Goths Have It Hard 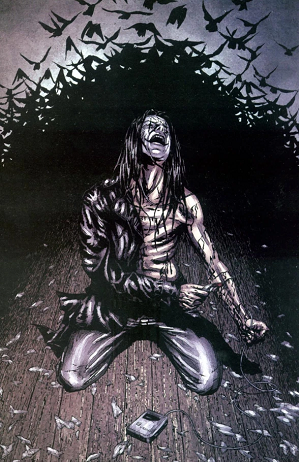 He had gone through horrible problems, and now he was gothic.
— Ebony Dark'ness Dementia Raven Way (referring to Harry "Vampire" Potter), My Immortal
Advertisement:

The Goth subculture, the emo subculture, and other related subcultures originated from a genre of music.note The goth subculture started with fans of "gothic rock", a variation on punk music. Meanwhile, the emo subculture began with fans of a certain type of rock music, "emotional hardcore." Now, both subcultures have expanded to include any music, fashion, or media that celebrates the morbid, dark, and spooky. Goths and emos may have a dark aesthetic, enjoy reading Gothic Horror stories, enjoy listening to sad songs about death, etc., but that doesn't mean they want pain, suffering, or death. note  In fact, most of them listen to this music as a form of therapy, using the music to help them through life

You wouldn't get that impression from fiction, though.

Most fictional Goths, emos, etc. adopt a dark aesthetic because they have some serious psychological problem, usually depression, but occasionally PTSD (or related mental disorders). At best, they'll be edgy and cynical. At worst, they may want to kill themselves or (especially in the case of emos) cut themselves. This stereotype is so pervasive, some people even believe that the emo subculture actually encourages self harm, which just isn't true.

Contrast Perky Goth. If a morbid character with psychological issues is a villain, see Dark Is Evil and Freudian Excuse. If not, see Dark Is Not Evil. May overlap with Troubled, but Cute. If the Goth's suffering is played for comedy, see Black Comedy and The Chew Toy, if not, see The Woobie (do note, however, that The Woobie is YMMV.)