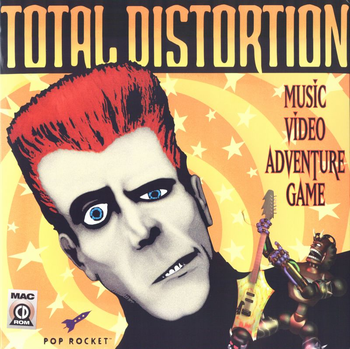 Taking place within an Alternate History setting, mysterious devices have suddenly appeared on Earth that scientists have found to be useful teleporters (albeit dangerous for living beings as it puts them into a six-week coma). They also noticed that they can teleport to different dimensions, most of which are based on pop culture. You play as a music director whose just recently come into a large sum of money and somehow come up with the insane idea to invade a dimension of chaos based on rock music to shoot music videos out of the weird imagery there. However the endeavor is quite risky as you spent most of your money building a tower to transport in and getting the go ahead to transport there which your government has starchly warned will not bring you back if you don't have the funds. What's more there's the matter of the dimension's dangers as well. So your mission? Get in, get the footage needed and hope you come out of this alive and financially sound.

It was acclaimed for its creativity though was criticized for the numerous backtracking and limited editing of the videos.

Guitar Warrior (You Are Dead)

Guitar Warrior (You Are Dead)