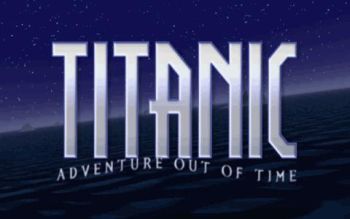 A race to alter history on a ship OUT OF TIME.
"The past, forever locked in regret. But what if the past could be changed?"
Advertisement:

Titanic: Adventure Out of Time is a Point And Click Adventure game from 1996 set on the Titanic.

You begin the game as Frank Carlson, a disgraced British ex-secret agent currently not enjoying retirement during the London Blitz of World War II, having been fired over failing his duty to uncover a conspiracy upon the Titanic thirty years ago. As he wistfully ponders upon his failure, his apartment is hit by the blitz, and he burns to death. Oh, well.

But wait, there's more! Carlson has been given a second chance by unseen forces to travel back in time to the Titanic, on that fateful night when it sank, in order to complete his mission. Despite not understanding how he's managed to return back to the past, he must now strive to set things right and, by completing his mission properly, change the future for the better. Literally.

Set within a first-person perspective similar to that of Doom, you must navigate across the Titanic obtaining stolen items that you and your contact have been sent to recover, as well as deal with various other little objectives from both friends and mutual interests. In the end, you must escape the ship with all of your assigned objective items either intact with you or in someone else's good care, before the ship itself meets its fate. The game has a similar style to (and seems to take place in the same universe as) Dust: A Tale of the Wired West from the same company.

The game was relatively obscure until it enjoyed a surge in popularity due to renewed public interest in the Titanic in the wake of James Cameron's film the following year, even though the two works were completely unrelated beyond their subject matter.

Because the game was released just before the 1996 miniseries, it holds the honor of being the first fictional depiction of Titanic to show the ship splitting in two before she sank.

In this scenario, it's the German Communists who rise to power in post-WWI Germany instead of the Nazis. Like in our world, however, the German communists decide to begin their own conquest of Europe, with the protagonist being executed by them once they conquer Britain.

In this scenario, it's the German Communists who rise to power in post-WWI Germany instead of the Nazis. Like in our world, however, the German communists decide to begin their own conquest of Europe, with the protagonist being executed by them once they conquer Britain.