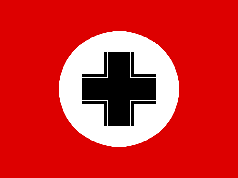 Flag of the International Black Cross Organization. Beware of their disaster relief.
"They're practically Nazis about the no-Nazis thing."
— Scott Sharkey, "Memoirs of an Urban Vigilante

Many a World War II–based game will not use a swastika (Hakenkreuz) to symbolise the Nazis, instead using the Iron Cross (still a symbol of today's German Army, Bundeswehr, albeit a modified version), the red-white-black tricolor of the 1871–1918 German Empire (which was briefly re-used by the Nazi regime alongside the Hakenkreuz flag from 1933 to 1935), or alternatively the Balkenkreuz (pictured at right).

There's a simple reason for this — in Germany, Russia, and some other countries, the display of anything Nazi-related in public is prohibited unless it's for educational, artistic, or scientific purposes, plus a lot of other contexts. This allows for the use of these symbols in World War II–set films (which are considered art — yes, even Indiana Jones). However, toys and games were not usually covered by these exceptions (at least in Germany) until August 2018, when the German video game rating bureau USK decided to allow swastikas in video games on a case-by-case basis provided they were "socially adequate", meaning they have to serve an artistic purpose (such as in Wolfenstein II: The New Colossus) or be used to represent historical events. Also, neo-Fascist groups have been known to appropriate various other symbols for their own ends.

The USK also refused to rate video games which use swastikas in their non-historical context, meaning that a swastika had to be an explicit reference to the National Socialist German Workers party and any other references that is attributed to the swastika (such as a Buddhist symbol for good luck, a fictional villain or cartoonish Nazis) were not allowed. Consequently, Nazi symbols are still not used in games released in Germany, probably due to developers worldwide being so accustomed to being unable to put them in the games, and thus voluntarily continuing the tradition of an utter lack of Nazi symbols themselves. It saves money to have only one version, avoids losing a market with over 80 million residents, and if the game is online, it makes sure that the German version is compatible with that of the rest of the world.

It is odd that video games do this, as Germany is a relatively poor market for war-based games to begin with, especially compared to the United States, Russia, and the United Kingdom. The only markets that prefer niche Japanese games at all times (like Japan and France) and places where the video game market is small. That being said, really mainstream FPS titles (like Call of Duty) do fare well and still sell in the millions.

The German video game market is also only the biggest market for simulator titles and city building games. These are all genres where a swastika has no real reason to appear or exist besides for humorous purposes. So most of what makes Germany's thriving video game scene has almost no real reason to use World War II symbolism.

Use of the associated expressions, such as "Sieg Heil!", are also banned. German Neo-Nazi groups choose to use symbols of Imperial Germany instead, which highly annoys German monarchist groups. Technically, the relevant law in Germany prohibits "anti-constitutional" symbols (movements openly seeking the overthrow of Germany's democratic system), not just far-right ones. The West German government initially deemed the flag of East Germany to be a criminal symbol and outlawed it, before lifting the ban in 1969 with the normalization of relations with their East German counterparts. To this day, the flag of the former Communist Party of Germany (KPD) is banned, although the hammer and sickle is not.

However, practically no one in English-speaking cultures knows this. Thus this trope, which often leads to censorship of swastikas in contexts that have nothing to do with the Nazis. Not only were the Nazis, well, Nazis, they were also plagiarists (unless they were time travelers). When people in English-speaking countries hear that there are No Swastikas because of German censorship, this may lead to Unfortunate Implications, as it is tempting to conclude that "the Germans are trying to push revisionist history and pretend the Nazis were never in power!"; and it's not only them, even modern Germans may offer this suggestion as the reason for excessive No Swastikas trope use. The official explanation is, of course, the absolute non-endorsement of the symbol, which even got a politician in trouble when she used the symbol in a context of anti-Nazism (to elaborate, a fist crushing it), but for this kind of use, the symbol is alright after the German equivalent of the Supreme Court changed things for such cases. (For the record, denying The Holocaust is also illegal in Germany.)

That said, the older tradition about Buddhist and Hinduist swastikas, used as a protective symbol, can sometimes be found in supernatural series like Kolchak: The Night Stalker and The X-Files.

There was even a real life instance during the Rape of Nanjing when the German businessman (he worked for Siemens, and was also a Nazi Party Member) John Rabe set up a protected area for refugees from the Japanese terror under the German flag, with its big swastika. Thus, for thousands of Chinese, even the Nazi swastika returned to its Hindu meaning.

Many countries have similar bans on the display of "totalitarian symbols" — Hungary, for instance, bans the display of the symbols of the Nazis, the Soviets, and the Arrow Cross Party. Lithuania has passed a similar law recently — also extending it to Soviet symbols

. And Latvia was warned in 2006 not to put swastikas — an ancient propitious symbol for them, too — on gifts intended for NATO ambassadors

. After all, the Germans wouldn't have been able to take them back home...

There is one particularly annoying case with the swastika when it is used as a Buddhist symbol of peace. It's shaped like a straightened Swastika, but may be mirrored compared to the Nazi swastika (clockwise or counterclockwise vs. the Nazi swastika's invariably clockwise), which leads to confusion in Western countries, as well as the Moral Guardians running around like headless chickens whenever one appears. As the export market has become increasingly important for Japanese creators of anime and manga, and despite the fact that swastikas are okay in Japan due to their original Buddhist significance, many creators are nonetheless preemptively avoiding swastikas in order to make their works easier to export.note The swastika symbol is an actual character in both the Japanese and Chinese written languages, with a character for both the original and a mirrored version. It's called "manji" and "wanzi" respectively. Examples include Naruto, where the swastika on Neji's forehead was changed to an X, and One Piece, where Whitebeard's logo was changed from a swastika to a cross. While it may seem like these changes were Bowdlerization by foreign localizers, these changes were actually mandated by Japanese executives, presumably so that foreign localizers wouldn't have to go through the trouble of doing the Bowdlerization themselves.