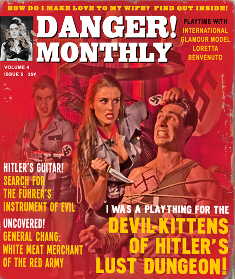 100% accurate
"According to old-timey men's magazines, not only were the Nazis substantially sexier than all but the most Harrison Ford-laden of period films would have you believe, but times were so tough during WWII — what with the rationing of metals and all — that even the most elite Gestapo officers were only permitted a single button."
— Cracked, "5 Things Old Magazines Apparently Believed About Women

Nazisploitation (also called Nazi exploitation) is a subgenre of the Exploitation Film and Sexploitation film that centers around Nazis committing horrific sexual acts as overseers of prisons or camps during World War II. Most follow the women in prison formula, relocated to a death camp or Nazi brothel, with a particular focus on gore, sadomasochism, and degradation. The genre also found its way into Pulp Magazines.

Related is the short-lived genre of stalag fiction

, which were pornographic dime novels on similar themes very briefly popular in Israel of all places, before being banned by the government. This was around the time of Adolf Eichmann's trial.

Werewolf Women of the SS

Werewolf Women of the SS is a fake trailer written and directed by Rob Zombie as an homage to the Nazisploitation genre.

Werewolf Women of the SS

Werewolf Women of the SS is a fake trailer written and directed by Rob Zombie as an homage to the Nazisploitation genre.