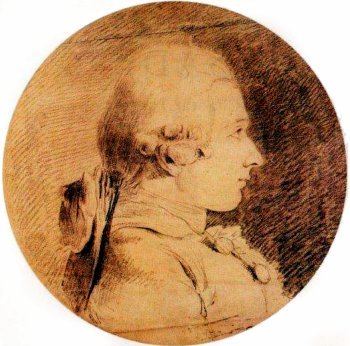 Donatien Alphonse François, the Marquis de Sade, was an aristocrat and member of the Decadent court of Louis XV's France. Sade wrote crude descriptions of sexual intercourse and incest, and was banned by religious powers from using a pen.

Sade's works were many, including novels, historiettes, plays and political pamphlets. Among the most notable of them are:

Sade's works gave rise to the word "sadism". He is a featured character in the play Marat/Sade, as well as the main character of the movie Quills.

Sade is one of the reasons the French prison the Bastille has such an infamous reputation. Although it held a handful of political prisoners who were all treated reasonably well, two weeks before the Storming of the Bastille` he shouted to the crowd outside his cell that prisoners were being killed, sparking a riot. He was transferred to an insane asylum before the actual Storming occurred.

After the Revolution, Sade became a citizen and gained several official offices, and eventually stood in the National Convention representing the Far-Left, as his political writings supported a property-free Utopia. This put him at odds with nearly every other French Revolutionary, which still supported some degree of property and capitalism. He was appalled by the Reign of Terror, during which he was imprisoned for a year and nearly executed, and his home in Lacoste was ransacked by an angry mob. Upon the death of Maximilien Robespierre, he was released along with others imprisoned. However, he was broke and had to sell his Lacoste castle.

When Napoleon came to power he ordered the arrest of the "anonymous author" of Justine and Juliette and Sade was imprisoned without trial. He was transferred to a harsher prison and two years later his family convinced the courts to put him in an insane asylum at Charenton. There the director, the Abbé de Coulmier, a Catholic Priest, had a liberal and progressive attitude towards rehabilitation. Coulmier let Sade's ex-wife stay with him and allowed Sade to write and stage his plays for the public using fellow inmates. The government eventually ordered Coulmier to stop all theatrical performances and after the fall of Napoleon, Coulmier was relieved of his duties.

Sade died in 1814. His skull was later removed from his coffin for phrenological examination, and his son had all his unpublished manuscripts (including a multi-volume epic called Les Journees de Florbelle) posthumously burned.