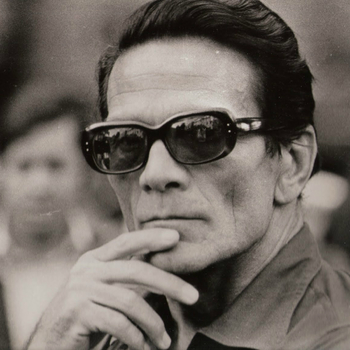 "Terribly bright and gifted. Crazy mixed-up kid, maybe -– but on a very superior level. I mean Pasolini the poet, spoiled Christian, and Marxist ideologue. There’s nothing mixed up about him on a movie set. Real authority and a wonderfully free way with the machinery."
— Orson Welles
Advertisement:

Pier Paolo Pasolini (5 March 1922 – 2 November 1975) was an Italian film director, writer and poet. He also distinguished himself as an an intellectual, a scholar, a novelist, a philosopher, a critic and a journalist and he kept those careers side-by-side with his forays into filmmaking.

Pasolini had a unique life. Put it simply, he was a Marxist, atheist, homosexual and an outsider in a macho Catholic society. The Italian Communist Party (PCI) were too corrupt for him and he pointed that out to them. So they chucked him out by outing him for being gay, which cost him his job, his home and led him to go to Rome where he lived and worked in the slums of the city. This, ironically enough, provided him the material for his poetry and his Breakthrough Hit, the novel Ragazzi di Vita which attracted Federico Fellini's eye. The latter was working on a film, Nights of Cabiria and needed a writer who knew Rome's underbelly well, and this proved to be Pasolini's entry into movies.

His first feature was Accattone, which had the same resonance in Italy as Mean Streets did in America, it was shocking and scandalizing to see this non-judgmental, unsentimental vision of the poor which avoided the Sliding Scale of Shiny Versus Gritty by tilting firmly on the right side of the equation and showing the poverty with no varnish and much clarity. His later films continued in the same vein, including The Gospel According to St. Matthew which is Exactly What It Says on the Tin, a film that, word-for-word adapts the first of four canonical gospels of the Life of Jesus. This was a surprising film for many reasons, since Pasolini was a noted atheist and this film on Jesus was played straight and very respectful and indeed embraced by the Church in Italy and Baptists in America's South, who would perhaps not admire Pasolini's sexual orientation.

Pasolini's films after that became Darker and Edgier since he felt that consumerism was having a negative influence on the youth of Italy. This sparked a Despair Event Horizon that culminated in Salò, or the 120 Days of Sodom, one of the most controversial films ever made.

The notoriety was only increased by Pasolini's brutal murder just before the film's premier in circumstances that have never been fully resolved and remain highly contested today.

Pasolini is considered one of the greatest film-makers of the arthouse era, an inspiration for directors and artists around the world. He is also considered an important poet in the Italian language and a major philosopher and analyst of contemporary culture. In 2015, Abel Ferrara, directed a Biopic of the man (Pasolini) chronicling his last days. Willem Dafoe plays the great auteur, benefiting greatly from his uncanny resemblance

As a side note, it should be noted that the triple alliteration of his name was apparently so awesome that in his film The Hawks and the Sparrows, which has credits set to song, the singer has a ball with that name.