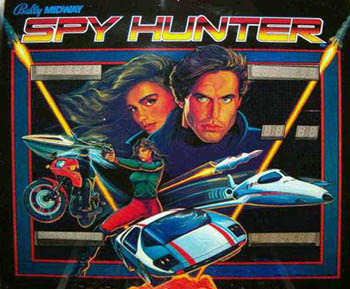 THE GAME IS PINBALL
THE PASSWORD IS EXCITEMENT!
Advertisement:

Spy Hunter is a Pinball Spin-Off of the hit arcade racing game of the same name. Designed by Greg Kmiec with art by Tony Ramunni, it was released by Bally/Midway in 1984.

In this game, the player must help Agent GK and his partner as they battle enemy agents on land, sea, and air. Make the Skill Shot to open the safety gate, then take to the air with missiles and a one-man jet to double and triple the playfield targets. Drive through the Weapons Warehouse for armament, then drop out to engage the target in a deadly battle over the drain. Knock down the drop targets to build the score towards a Special, hit the SHOT targets to light the spinner, then enter the saucer hideout and collect the Hunter bonus.

Pinheads end up sharply divided over Spy Hunter. Critics bemoan the highly unorthodox design, with a trisected playfield that leaves the left side wasted, a dearth of satisfying shots, and lackluster sound effects. Fans, in turn, embrace it as a change of pace from conventional games, with three separate areas that provide a good variety of play. There is, however, consensus over the music, a catchy synthesized version of "Peter Gunn."

In 1985, Bell Games of Italy released Saturn 2, a conversion kit for Bally pinballs based on Spy Hunter. Although the layout remained the same, the software was altered a bit, and the game was rethemed to a space battle between unspecified factions.