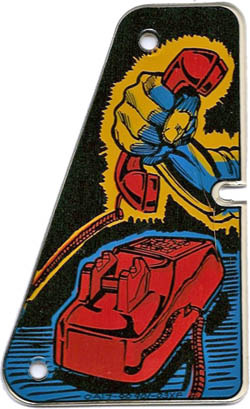 Jim Hacker: Tell me general, where's the hotline?
General: Which one?
Jim Hacker: The one to Russia.
Bernard Wooley: The Red Hotline, sir.
—Yes, Minister
Advertisement:

If there's a crisis between the USSR and the US in fiction, expect the President to phone up the Soviet leader on his direct line, usually a red dial-telephone with no dial.

Except it's not like that in real life, and never was. Beginning operation in 1963, the Moscow-Washington Hotline,

colloquially known as the "Red Phone", is designed to relay text – originally via Teletype, then fax machine, nowadays a secure fiber-optic line through which emails are exchanged – because of the possibility that speech could be misinterpreted (a voice link was tested in the 70's but dropped); each side writes in their own language, which is then translated and both versions are given to whichever leader. Also, the Hotline connects the Pentagon to what was then the Communist Party leadership across the street from the Kremlin; it's not a direct link between the White House and Kremlin itself. During the height of the Cold War, the line was tested hourly, often using poetry. The Hotline is still in use today, but it still doesn't involve the use of a phone.

Nowadays, after the Cold War, the Hot Line trope is more likely to be used between the Ultimate Authority Mayor or other Reasonable Authority Figure and a local superhero. Expect a Catchphrase, often falling under "To the Batnoun!" The closest thing to this in real life is fire houses and fire brigades using red phones and the like to receive emergency calls from emergency dispatch centers.

See also Bat Signal, for another means of summoning a superhero.