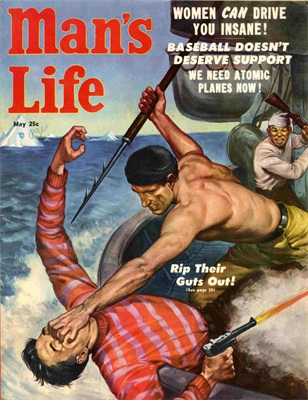 Well... This is a bit much, isn't it?note *BIFF!* No!
Mongol General: CONAN! What is best in life?
Conan: To crush your enemies, see them driven before you and hear the lamentations of their women.
— Conan the Barbarian (1982)
Advertisement:

A work that is heavily dependent on things, situations, or actions that are stereotypically masculine, in order to appeal to a predominantly male audience. Made by men, for men.

Expect to see Perma-Stubble, hot blood, improbably muscled males, Carpets of Virility, lots of fighting, Stuff Blowing Up, large amounts of Rule of Cool, and if you're lucky, Manly Tears. Most, if not all of the main characters are often grade-A Badasses and sometimes Large Hams. Expect to see somebody shout a phrase WHERE! THEY! EMPHASIZE! EVERY! WORD! which can result in Memetic Mutation. Soundtrack is prone to be fueled by The Power of Rock.

Traditionally, the role of women in such works is often stereotypically feminine, as support characters or Love Interests, sometimes satellite ones, while the men fight and die (often for their sake). A woman may be the Unwitting Instigator of Doom, doing some small and unimportant action early in the movie or in the origin story, which start the chain of events that lead to some great disaster For Want of a Nail, and the real men would have to deal with it (for example, the villain may have turned into a villain in the first place because Love Makes You Crazy). Nevertheless, badass females are far from uncommon, and they may or may not be masculine in their interests. Either way, expect Fanservice. Though keep in mind actual sex or womanizing doesn't necessarily mean "manly", as most playboys tend to have physical (and personality) traits opposite to the ones described above.

These works also tend to glorify war, although there have been many manly works with the opposite viewpoint.

Named after a line

in the contrasting segment of the Janus Syndicate parody video Counter-Strike For Kids.

Just because a work falls under this trope doesn't mean that it can't have any feminine appeal or a significantly large female audience. You'll find that many of the examples below have almost as many female fans as they do male fans. This trope simply means that stereotypical masculine behavior is a significant focus of the work at hand. The number of female fans generally depends on how rigidly and/or multi-dimensionally the work fits this trope.

When those in charge think that a foreign video game would sell better with this aesthetic than the one it came with, you get the American side of American Kirby Is Hardcore.

The World of Badass is often the setting for this trope. Compare/Contrast Darker and Edgier. See also Awesomeness Is Volatile. Not directly related to Rated M for Money in any way but the potential for intersection between the two is high. In cases of works where voice acting is involved, Badass Baritone will often apply with a lot of the male characters.

Contrast Chick Flick (which is this trope's opposite), Kawaisa and Moe (which are all opposed aesthetics).

Unrelated to Avoid the Dreaded G Rating, though they certainly can overlap.