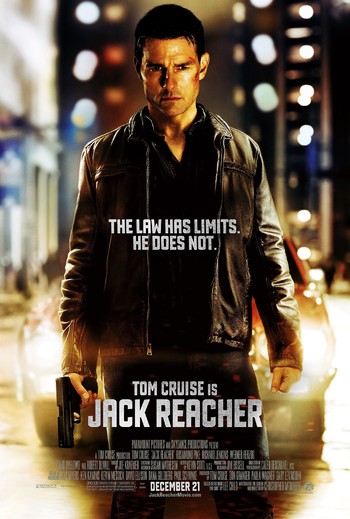 "You think I'm a hero? I am not a hero. I'm a drifter with nothing to lose."
Detective Emerson: So what does an Army cop do, mostly? Break up bar fights?
Jack Reacher: I did what you do pretty much, with one minor difference.
Emerson: What's that?
Reacher: Every suspect was a trained killer.
Advertisement:

Jack Reacher is a 2012 American action thriller film. It is an adaptation of Lee Child's Jack Reacher series, the 2005 novel One Shot more specifically.

A man with a sniper rifle goes to a parking garage overlooking the Allegheny River in Pittsburgh, and kills five people across the river in the park, seemingly at random. The police are quick to find evidence and the man, James Barr. When they have him in for questioning, he writes "Get Jack Reacher" on a notepad. Before they can contact Reacher, the man is brutally beaten by fellow inmates and rendered comatose.

Reacher (Tom Cruise) arrives and begins to examine the case, discovering the murders are not as cut-and-dry as they seem...

It was followed up in 2016 by Jack Reacher: Never Go Back, based on the 2013 Jack Reacher novel, Never Go Back. The 2022 series Reacher is a Continuity Reboot that is not connected to the films.