Taking the Fight Outside 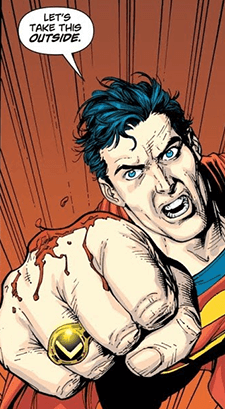 Moss: [slaps Roy] How dare you call my sexy wife a bitch!
Roy: Do you want to take this outside?
Moss: With pleasure, Sir!
— The IT Crowd
Advertisement:

When two or more characters are about to fight or in the middle of fighting, a bystander will interrupt and ask them to take the fight outside. Alternatively, as an overlap with Let's Fight Like Gentlemen, one of the fighters could suggest settling the score outside. Either way, the usual concern is to avoid unnecessary damage to Innocent Bystanders and the building's interior.

The idea of taking a fight outside comes from the practice of Sacred Hospitality. Centuries before the existence of Hiltons or Motel 6, travelers would bunk down in the homes/tents/stables of those who had spare room. This could also mean two men who had bad blood between them could end up in the same house for the night. It would be considered a violation of guest right if they came to blows inside and damaged the hosts' property with a wrestling match or sword fight. So if the pair did come to blows, you would take it off the property to do so.

This can overlap with Do Wrong, Right if the interrupter starts with seemingly disapproving of fighting at all, only to switch to shooing the fighters outside.