From Camouflage to Criminal 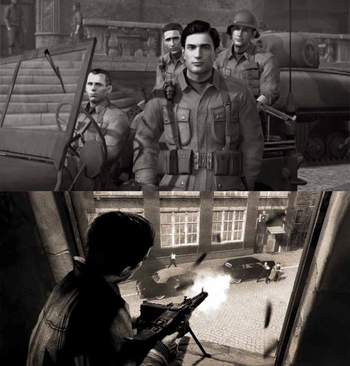 What's a killer to do when the fighting is over?
"There's a group of guys down here, way out on the hairy edge. They did covert stuff, and then... they went rogue. Went renegade, dropped off the face of the Earth, disappeared into drug land. And with their 'special skills', they cut one hell of a swath through their competition."
— Colonel Styles, Basic
Advertisement:

Being in the military can teach you some skills, but the skill that people most commonly associate with the military, (i.e. how to hurt or kill people) doesn't exactly translate well to civilian life. However, there is a way around that for more morally... flexible... people; put those skills to work in crime, especially organized crime, and start picking apart the local competition.

Many fictional criminals who come from a military background not only tend to be much more effective, dangerous, and capable than everyday thugs, but also tend to have a reputation for ruthlessness and cold-bloodedness when getting their hands dirty. As these guys have years of combat experience and military tactics up their sleeve, it's no surprise that they'll become The Dreaded to communities and other criminal organizations alike. Even the law has to be extra careful when pursuing one; if cornered, a soldier-turned-crook can give the good guys a nasty run for their money.

This trope is particularly common if the character in question is a Shell-Shocked Veteran who has been broken by their experiences, a Sociopathic Soldier who was clearly a bad apple while in the service, and the Returning War Vet who finds You Can't Go Home Again may be likely to fall into this. Because Elites Are More Glamorous, expect a character doing this to be from a section of the military either known for being unusually badass or flat out special forces/covert ops.

While often exaggerated in the media, this is very definitely Truth in Television, in ways which can vary from the tragic to the terrifying. It is also Older Than Feudalism, at the very least, as it was a significant factor in the coup d'etat staged by Critias and the other Thirty Tyrants in ancient Athens (of which the execution of Socrates was just one consequence). It also played pivotal roles in the 20th century, specifically in the rise of Fascism and Nazism, and conversely, in the Russian and Chinese revolutions.

A companion trope to Lawman Gone Bad. Contrast Badges and Dog Tags, when policemen have an ex-military background. Compare and contrast the Privateer, who was essentially paid by his nation to become a pirate against another nation's shipping, and the Boxed Crook. The inversions are Recruiting the Criminal and Trading Bars for Stripes, where a character facing prison time or in prison is given the choice of serving in the military instead. May sometimes overlap with Former Regime Personnel, Rogue Soldier and Rogue Agent.