Have You Told Anyone Else? 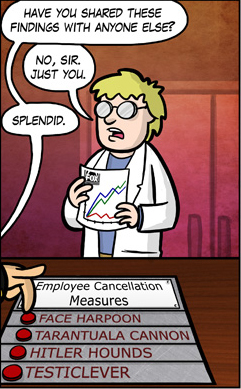 No one else has seen these typos, right?
Joshua the Groundskeeper: Who else saw you come in?
Troy: If we say "nobody", are you going to stab us with your bush scissors?
— Community
Advertisement:

There's also the question "Does anybody know you're here?" or similar. Answering "no" means automatic death. It's rare to find someone lie and say something like, "Why yes, I told Bob, Joe, and Susan where I'd be going, who I was meeting, and what I'd be saying. And hell yeah, you can have this disc — I Made Copies." If they do say they told someone else, it's obvious that they just now realized their error and are badly lying about it — Nialliv can see right through this.