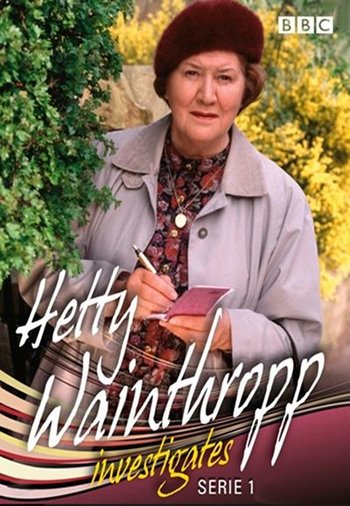 A British mystery drama shown from 1996 to 1998. The series stars Patricia Routledge (or Mrs. Bouquet to you) as Hetty, who on her sixty-fourth birthday decides that her life requires a bit more spice and adventure. An insightful and observant woman, she decides to open a detective agency. Along with her supportive husband Robert (Derek Benfield) and 'Young' Geoffrey (Dominic Monaghan), their lodger, she investigates a number of mysteries and helps those in need seek justice.
Advertisement:

The premise and characters derive from the 1986 novel Missing Persons by David Cook (who would co-write the BBC show). ITV had already made their own feature length adaptation of the novel, but opted out of a full series, with the BBC series choosing to rewrite its own origin pilot. The show ran for four series, and while the BBC commissioned a fifth, it never came to be.