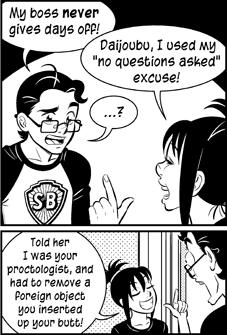 One of the best types of lies are ones which make people want to stop asking questions altogether. A good way to accomplish this is for the lie to be about something You Don't Want to Know.

An Embarrassing Cover-Up is great not only because it can cause the person questioning them to lose interest, but also because they are a good, easy-to-explain cover-up for suspicious behavior. Bob might be suspicious if Alice claims she snuck off in the middle of the night without telling anyone to get ice cream. If she claims she did so to replenish her tampon supply or simply go on A Date with Rosie Palms, on the other hand, there's at least a 9 in 10 chance that Bob will leave it at that.

"Women's problems", in fact, are a very common use of the trope. There is even an example of this happening in biblical scripture, making this trope Older Than Feudalism. For men, explosive diarrhea is a much more popular choice.

Sometimes an Embarrassing Cover-Up can create friction in a group that's keeping a secret, particularly if someone makes an embarrassing cover up for someone else. For example: Bob and Alice are working on Project X in total secret. One day, Carol catches them together and asks what they're doing. To Bob's horror, Alice proceeds to invent a cover story which is hugely embarrassing to Bob. But Bob has to go along with it or risk making Carol suspicious.

Supertrope to Bathroom Search Excuse. This trope overlaps with Infraction Distraction if the cover story is an actual admission of guilt (albeit to a much smaller offense than the one being concealed) in addition to an embarrassing disclosure. Contrast Revealing Cover-Up, in which the lie only attracts more attention.

See also Too Much Information and Sure, Let's Go with That. For a more literal "embarrassing cover up," see Hand-or-Object Underwear (or maybe Naked Freak-Out).

Tina and Gene dispose the drywall dust in the trash by loudly calling it dandruff, cocaine, and baby formula.

Tina and Gene dispose the drywall dust in the trash by loudly calling it dandruff, cocaine, and baby formula.