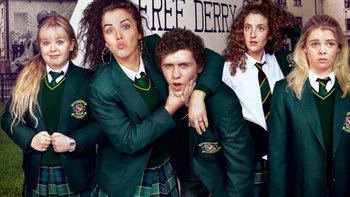 Clare, Michelle, James, Orla and Erin
Erin Quinn: Teenagers have rights now, ya know?
Mary Quinn: ...Don't be ridiculous.
Erin Quinn: They do, Ma. It's true. Sure, Macaulay Culkin might be divorcing his parents!
Advertisement:

Derry Girls is a Channel 4 British-Irish comedy set in Derry/Londonderry in the 1990s, created and written by Lisa McGee. It features a group of teenage schoolgirls and James as they get into mischief. They are: Erin, an aspiring writer, her cousin Orla, a naive cloudcuckoolander, and best friend Clare, a nervy wannabe-activist, their friend Michelle, a loud-mouthed party girl, and Michelle's cousin James, a soft-spoken unfortunately English boy.

The third and final series, after repeated delays to filming due to the COVID-19 Pandemic, began airing on 12 April 2022 and wrapped up with an extended-length special set in the week of the referendum on the Good Friday Agreement on 18 May.

Available on Netflix outside the UK and Ireland. May not be comprehensible outside the latter.