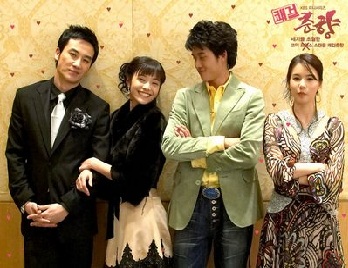 Delightful Girl Choon Hyang is the first Korean Series Romantic Comedy by the amazing team of The Hong Sisters and was broadcast on the KBS channel in 2005.

The plot is loosely based on a Korean Folk Tale in which the faithful wife is forced to remarry a corrupt bureaucrat.

Two high schoolers, Mong Ryong and Choon Hyang, are forced to "marry" to save their family's reputations when they accidentally fall asleep together. The two barely tolerate each other at first, but over time, feelings grow. Byun Hak-Do, a rich, handsome and successful talent agent falls in love with Choon Hyang and blackmails her into leaving Mong Ryong. This results in a long separation for our couple. Will they ever find happiness?