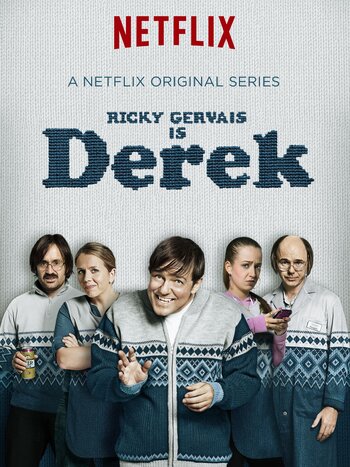 Derek is a British television Comedy-Drama written, directed by and starring Ricky Gervais and co-starring Kerry Godliman, Karl Pilkington and David Earl. The pilot was produced by Derek Productions Ltd. for Channel 4 and aired on 12 April 2012.

On 9 May 2012, Channel 4 announced that it had commissioned a full series, which began airing on 30 January 2013. On 4 March 2013 (two days before the final episode of the first series was aired), it was announced that Derek had been re-commissioned for a second series.

The series became available for streaming on Netflix on 12 September 2013.

Gervais plays 49-year-old Derek Noakes, a care worker in a home for the elderly who has worked there for three years. He likes watching reality television shows and game shows and is interested in celebrities, fame, YouTube, and above all, talking about animals. He is kind, helpful, and selfless, with good intentions. He is vulnerable because of his childlike naivety and lack of intelligence. He is ridiculed and ostracised, as well as being marginalised by mainstream society because of his social awkwardness, unattractiveness, and lack of inhibitions. Derek says it is more important to be kind than to be clever or good-looking. Many media sources describe him as autistic, although Gervais himself has always stated that Derek is not mentally disabled.