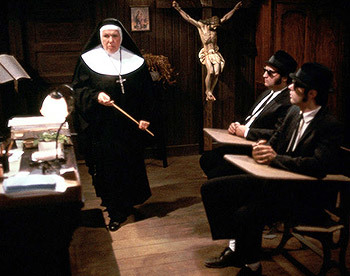 A character type of stern, usually elderly nun, who acts as a Stern Teacher at a Catholic school (possibly even a Sadist Teacher at a Boarding School of Horrors variety) but may (or may not) be looked back upon with some affection. A Discredited Trope nowadays, since a good many teachers at Catholic schools are now laypeople — not to mention that after about The '70s or so, any teachers beating students would not go over well with parents or administrators, whether those teachers have taken vows or not — but at one time occasionally Truth in Television.

The strictness that was their hallmark was partly due to the nuns applying the same standards to their students that nuns were expected to hold themselves to, and also partly because Catholic schools both then and now were occasionally used as reform schools for problem children.

See also Stern Teacher and Nuns Are Spooky. The nun in question may or may not be a Child Hater.

Sister Mary Stigmata, aka "The Penguin", is none too pleased with Jake and Elwood's "filthy mouths and bad attitudes".

Sister Mary Stigmata, aka "The Penguin", is none too pleased with Jake and Elwood's "filthy mouths and bad attitudes".