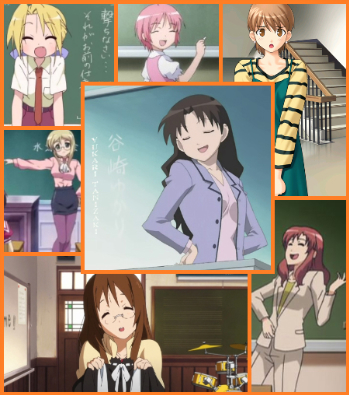 If you are a teacher in Animeland, and you wouldn't fit on this picture, you probably don't exist.note Pictured, clockwise from top left: Kuroi-sensei, Tsukuyomi-sensei, Taiga, Koigakubo-sensei, Sawa-chan, and Yukari-sensei, Center: Yukari-chan.
"Why do female teachers in anime always seem to think they're one of their students?"
— Sawyer Wallace
Advertisement:

A common Japanese media character type, the female high school teacher who is fairly young, attractive, even cute, and on friendly terms with her students.

On the other hand, she is still unmarried, and very conscious about it, as well as about the lack of respect she gets. She is usually extremely childish, such that even her own students appear more mature than her.

If the story's emphasis is on the female students, she will act like one of the girls, a teenager in spirit. If the protagonist is male, she's more likely to be a bit into a Teacher/Student Romance, as a comical side-character in a Harem Series. A common character flaw Played for Laughs is drinking enthusiastically.

Their frequent complaints about being unable to settle down in a proper relationship are probably based on traditional Japanese culture's conflicting expectations that a married woman shouldn't work and a woman over 25 should be married. For the intended audiences of many anime, schoolteachers provided the first childhood exposure to women with this dilemma, enforcing the stereotype that teachers are the sort of women who can never get married.

The trope's name is a combination of two honorifics, "-sensei" is used for teachers, like "Miss", and "-chan" is an informal affectionate diminutive. While the combined usage is grammatically correct, and it reflects the characters in spirit, it's unlikely that anyone would use it for a Real Life teacher either in this form, or as "-chan-sensei", since it would be about as conflicting and disrespectful as "Miss-baby", or "Teacher chick" in English.

On the other end, they tend to be on a First-Name Basis by their students, which is incredibly rare in real life. "-sensei", like its western equivalents, is normally associated to the last name, but these characters may as well not have one.

This trope can also overlap with Misplaced Kindergarten Teacher, Hippie Teacher or Cool Teacher. May preside over a Wacky Homeroom.