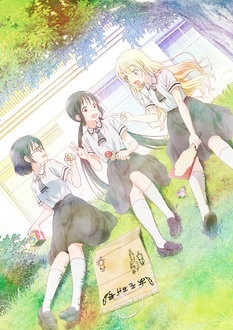 Kasumi Nomura is a strait-laced fourteen-year-old who has grown up hating games thanks to her older sister always beating her at them. When she sees the foreign transfer student Olivia playing a silly game of rock-paper-scissors with the energetic Hanako Honda, Kasumi sees her chance to improve her terrible English grades; in exchange for teaching Olivia how Japanese people have fun, Olivia agrees to teach Kasumi English. Little does Kasumi know that Olivia was actually born and raised in Japan by foreign parents and doesn't know a word of English. This leads to the formation of the Pastimers Club, which is dedicated to playing games and having fun...

...and by "fun" they meant taking their games too seriously, with doses of overacting and schadenfreude in between.

Asobi Asobase (あそびあそばせ) is a manga series written and illustrated by Rin Suzukawa. It was originally published on Hakusensha's Young Animal Densi website starting in June 2015 before being moved to their Manga Park website in August 2017. The series received an anime adaptation directed by Seiji Kishi for Lerche, which aired from July 8 to September 23, 2018. An OVA was released on December 26, 2018. The series is currently available for streaming on Crunchyroll under the title Asobi Asobase: Workshop of Fun. The manga will conclude on October 28, 2022.

Narrator: Sorekara do shitano** And then, what happened?