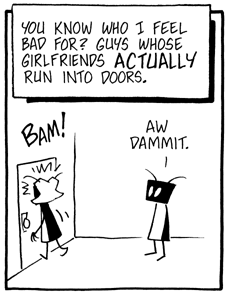 Ino: Oh god, Naruto's really hurting him in there!
Sasuke: No. He's not. He's having sex with me.
— Naruto: The Abridged Comedy Fandub Spoof Series Show
Advertisement:

Failing to see the difference between playfulness (or similar) and abuse can be annoying at best and disastrous at worst.

This can take two forms:

In both cases, someone is likely to suffer.

If Played for Laughs, the situation is almost always innocent and quickly corrected. When Played for Drama, however, a real victim might be denied help, an innocent person might get his life ruined with unfair accusations of abuse by a Wife-Basher Basher, or the designated "victim" gets stalked or outright oppressed by unwanted "rescuers". These helpers might even go to great lengths trying to force her to "realize" that she's a victim of abuse. And no, not the actual abuse that they are subjecting her to.

This is not a matter to take lightly — but it's worth noting that such mistakes are possible in real life. For instance, people with very pale skin can, and often do, get random bruises from going about their daily business and not even notice it.

See also Help Mistaken for Attack, Friendly War, Casual Kink, and Safe, Sane, and Consensual for non-abusive stuff that can be mistaken for abuse. Compare You Just Ruined the Shot, for cases where the "victim" was an actor in a movie rather than a participant in a sexual game. Contrast Fetishized Abuser as well as Double Standard: Abuse, Female on Male for situations that are clearly abusive but the audience isn't really intended to care. Also compare Not What It Looks Like and Accidental Pervert.

Warning! Expect unmarked spoilers, since this trope is about situations being revealed to be different than what they looked like.