Literature / I Capture the Castle 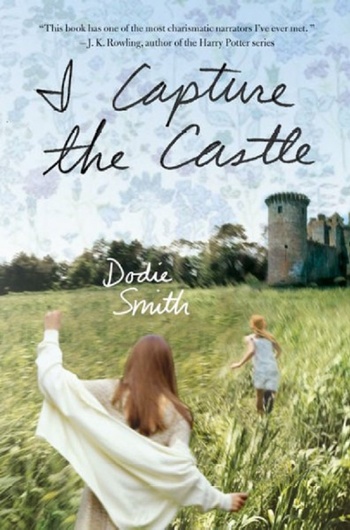 "And I regret to say that there were moments when my deep and loving pity for her merged into a desire to kick her fairly hard.”
— Cassandra Mortmain, "I Capture the Castle"
Advertisement:

Set in the 1930s in England, I Capture the Castle (1948) is Dodie Smith’s best-loved (though little-known) book, with the power to leave its readers with a mild case of the warm fuzzies.

I Capture the Castle is the journal of Cassandra Mortmain, a 17-year-old girl who lives in a rented castle in the depths of Suffolk with her impoverished and decidedly unconventional family: her reclusive father, who was once a very famous and ground-breaking author until he was sent to prison for three months for threatening his wife with a cake knife; her eccentric and glamorous stepmother, Topaz, who was once a nude model and still believes in "communing with nature"; her flawed but beautiful elder sister, Rose, who is desperately sick of being poor; her younger brother, Thomas, who is smart and doesn’t appear much in the book until the second half, and the hired hand, Stephen Colly, who is extremely handsome and desperately in love with Cassandra.

The plot begins when the young American heirs to the castle and its property, Simon and Neil Cotton, plus various sophisticated relations, come to England to look it over. In doing so, they run smack-bang into Cassandra having a bath. After the initial awkwardness is over, they get along swimmingly. Before long, Simon and Rose become engaged. Then Cassandra falls in love with Simon, which messes things up for her a bit. But even though she’s lovesick, she still manages to hatch a plot with her brother to get their father writing again.

Even when she’s in the midst of lovesickness, family rows and a couple of embarrassing mishaps, Cassandra still manages to be level-headed and adventurous. She is sometimes naïve and sometimes astonishingly wise, but always intelligent, funny, optimistic and unexpectedly honest.

Made into a movie by The BBC in 2003 starring Romola Garai as Cassandra, Rose Byrne as Rose, Marc Blucas as Neil, Henry Thomas as Simon, and Henry Cavill as Stephen.