Literature / If This Goes On 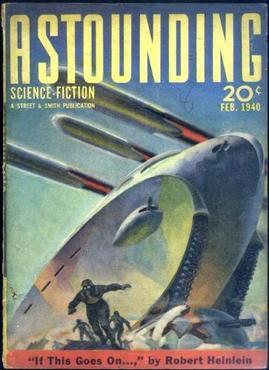 "If This Goes On—" is a science fiction novella by Robert A. Heinlein, in which 21st-century America is in the grip of a theocratic dictatorship led by First Prophet Nehemiah Scudder. The protagonist, John Lyle, begins as a loyal member of the regime and ends as a key player in the resistance movement that overthrows it.

The novella was first published in Astounding Science Fiction in 1940; a revised and expanded version was published along with related material in the 1953 book Revolt in 2100. It is part of Heinlein's "Future History" 'verse.