Girl in the Tower 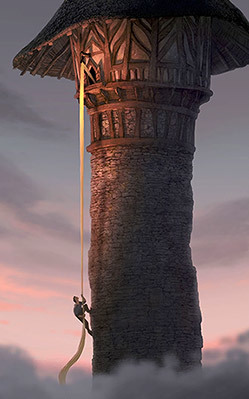 Using stairs to get to her is optional.
Shrek: Go over there and see if you can find any stairs.
Donkey: Stairs? I thought we were lookin' for the Princess.
Shrek: The Princess will be at the top of the stairs in the highest room in the tallest tower.
Donkey: Well, what makes you think she'll be there?
Shrek: I read it in a book once.
— Shrek
Advertisement:

The standard place to imprison damsels in distress and overthrown princes: A tower. Preferably on top of the tallest tower, in the biggest castle, on the highest hill, in the most dangerous land in the whole wide world. After all, It's All Upstairs from Here. It's generally up to the Knight in Shining Armor to free the damsel in distress from it.

May be attached to an Evil Tower of Ominousness or The Alcatraz, although some are freestanding. A Bedsheet Ladder or Rapunzel Hair is an invaluable tool in such cases. Possibly inspired by the Tower of London; originally a royal residence, the Tower later became a prison that was often used to house royal prisoners.

See also Locked Away in a Monastery (used for broadly similar purposes, but without the implication of evil) and Madwoman in the Attic (a darker version where someone considered incapable of venturing out into normal society is kept hidden and confined).