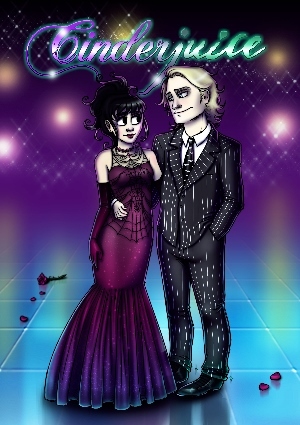 The "Contractually Obligated Chaos" series is the work of Lady Norbert, and is a series of fanfics based on the Beetlejuice cartoon, utilizing Fairy Tale Motifs inspired by assorted Disney films. They each take way more than thirty minutes (with commercial breaks).

), was intended as a stand-alone story.note Hence why the page is named for it and not the series. Lydia's about to graduate from high school and wants to attend her senior prom, so Beetlejuice asks the Neitherworld's Fairy Godfather to let him be human again for one night. Shockingly, things don't go according to plan, and the pair find themselves in serious hot water. What initially starts out as a pretty clear Cinderella parody (with a little The Godfather thrown in) quickly jumps the tracks to become something a bit more crazy, which is only natural when Beetlejuice is involved.

Tropes present in these fanfictions:

open/close all folders
The series as a whole
Cinderjuice
Advertisement:
The Bug Princess
Meteor Shower
Sleeping Beetle
Bug Princess and the Seven Months