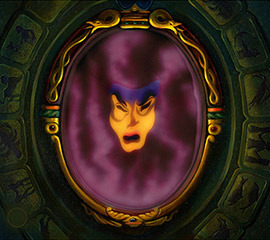 Outlook doubtful, ask again later.
"I will use my magic mirror for spying on my enemies rather than for vain attempts at preserving my position as fairest in the land."
— Guidelines for Evil Empresses

A common household device, sometimes employed as a symbol of vanity, but with much deeper roots: combining the reflective and symbolic properties of flat, still water and the portability and delicacy of glass, mirrors show a character their reflections, and often much, much more...

A common staple of fantasy literature and movies, the Magic Mirror is exactly what you think it is: A mirror with magical powers. Like a Crystal Ball, they can be used for seeing the future or communicating with or spying on someone at the other end, but a mirror is much more versatile; other possibilities include the mirror being used as a portal through time or space, or even into a Mirror Universe, and a Crystal Prison to trap foes. A mirror may even be used to reveal the true nature of one of the main characters or the villain. They are the standard tool for a Vain Sorceress who wants to know who is the Fairest of Them All.

Often, the Magic Mirror itself may be sentient; if it is, it's usually evil, or at the very least quite fickle.