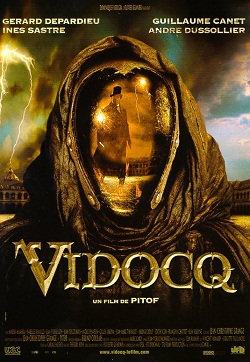 Vidocq is a French supernatural period thriller from 2001 directed by Pitof. It is notable for being the very first film shot entirely with a digital camera (and a very crazy one at that).

In 1830 Paris, as the July Revolution looms in the horizon, former Sûreté officer now working as private detective Vidocq

(Gérard Depardieu) disappears after tracking down and fighting a mysterious killer with a mirror mask known as "The Alchemist". Vidocq's biographer Etienne Boisset (Guillaume Canet) then starts tracking his movements, while the Alchemist tracks his and murders witnesses along the way.

For a more grounded cinematic take on Vidocq's life, see The Emperor of Paris.