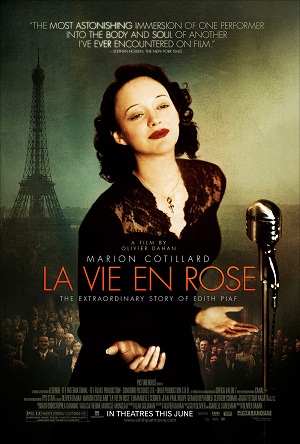 La Vie en Rose (French title: La Môme) is a 2007 French film directed by Olivier Dahan. It is a romanticized biopic about the glorious and tragic life of French singer Édith Piaf, and stars Marion Cotillard in the leading role, for which she won the Oscar for best actress. It also became one of the only French films to win more than one Oscar, the other being for makeup. The international title comes from what is probably her most famous song, "La Vie en Rose" and the French title comes from her nickname, "la Môme Piaf".

The film's narrative structure is a largely non-linear series of key events from the life of Edith Piaf, many of which the audience ultimately learns are evoked as flashbacks from within Edith's own memory as she's dying. Despite the fractured narrative approach, the film is anchored at the beginning by predominance of elements from her childhood, and at the end with the events prior to and surrounding her death.