Film / The Emperor of Paris 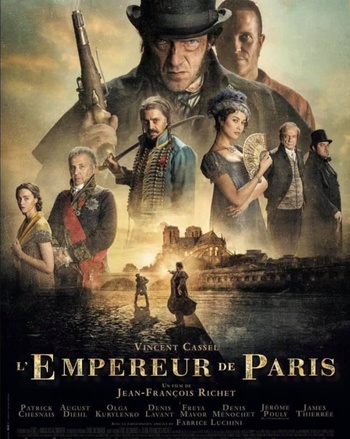 The Emperor of Paris (L'Empereur de Paris) is a 2018 French historical crime film directed by Jean-François Richet (director of Mesrine) and written by Eric Besnard.

At the time of the Napoleonic Empire in 1805, Eugène-François Vidocq (Vincent Cassel) is a convict whose multiple escapes from penal colonies became the stuff of legend in the Parisian underworld. One day, he is caught, and, as he's about to be condemned to death, makes the police prefect of Paris an offer: he can use his vast knowledge of the underworld to help them arrest criminals, and they will spare him the guillotine in exchange. They accept, and Vidocq then creates a brigade of his own with people he trusts. His spectacular results soon start showing, and they soon make him a primary target for the criminal networks.

The cast also includes Olga Kurylenko as the Baroness of Giverny, Freya Mavor as Annette, Denis Ménochet as Dubillard, August Diehl as Nathanael de Wenger, James Thierrée as the Duke of Neufchâteau, Fabrice Luchini as Joseph Fouché and Denis Lavant as Maillard.

There was a previous French film about the protagonist, 2001's Vidocq, which was set later in time (in 1830) and unabashedly veered into the supernatural, while The Emperor of Paris aims at staying grounded in reality and truer to the character's history, even with some obvious fictionalization.

The Emperor of Paris provides examples of: