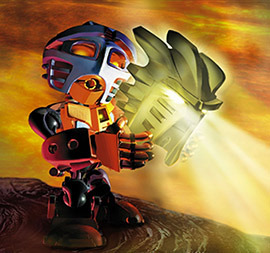 Hey, there's an inscription... One mask to rule them all, one mask to find them. One mask to bring them all, and in the darkness bind them... Eh. Probably nothing.
Advertisement:

The Mask of Power is an object when worn on the face grants the wearer any number of powers depending on the mask itself.

Often it will get some backstory to explain its power, whether that's where the power comes from or what sort of power it is. Perhaps it was the facial representation of some deity, or it may have been worn by some ancient ruler or mage, or maybe it was connected to some vaguely defined tropical mysticism. The latter point is possibly influenced by the preponderance of masks in Tiki culture.

Then there's the symbolism of taking upon oneself a new face, the metaphor of looking through different eyes becoming literal as well as the sense that masks are just really badass. However the flip side of the power being in the mask and the importance of the "new face" that can have its own personality is that you can get a literal Becoming the Mask situation, with the mask taking over the character.

Not to be confused with Cool Mask, in which a character who wears a mask is assumed to be powerful but does not necessarily have power because of the mask itself.