Your Soul is Mine! 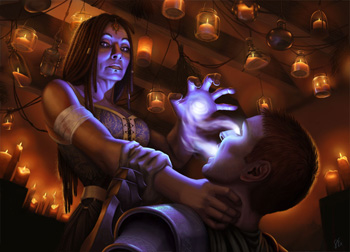 Elder God: You are weak, you must feed.
Raziel: The old hunger has left me. I have no desire for blood.
Elder God: You are changed. Your blood-thirst is replaced by a deeper need— you have become a devourer of souls. To sustain your strength, you must hunt the lost spirits of the Underworld, and consume the souls of your enemies.
— Legacy of Kain: Soul Reaver
Advertisement:

People just can't seem to get enough of them souls! "Purchasing one legally" is only one method of obtaining them. Outright theft works just as well, with much less hassle.

There's a few ways it can go:

The Trope Namer is Mortal Kombat: The Movie, which had Shang Tsung saying this just before he proceeds to steal the souls of defeated fighters. His soul-stealing frequently involves the second and third kinds described above.

Super-Trope to Soul Eating, where souls are taken because they make tasty snacks. Compare Soul Power, which is about mastery of souls in a more general sense, and doesn't have to involve soul theft. See also Our Souls Are Different. See Anatomy of the Soul for a parts list.