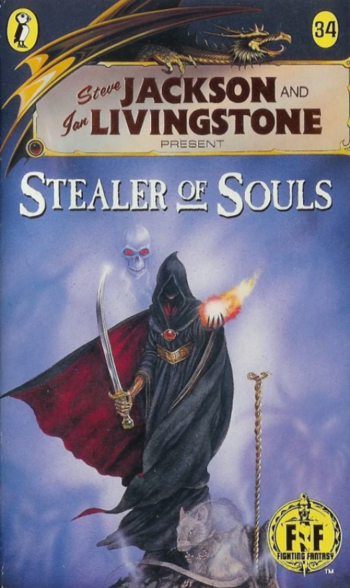 Your soul is MINE!
Advertisement:

Stealer of Souls is the 34th installment of the Fighting Fantasy Gamebooks written by Keith Martin. It is notably the first of six gamebooks Martin has contributed to the franchise.

The evil wizard Mordraneth, a dangerous Master of Illusion and all-round powerful archmage, has found a way to unleash a magical army of fear on Titan. With this power, he seeks to Take Over the World (yeah, we didn't see that coming, too...) and Alsander, the only lawful wizard capable of stopping him, has been kidnapped by Mordraneth's forces. The hero, YOU, have been entrusted by Vanestin of Pollua, a mage, to rescue Alsander from the Isle of Despair. However, you will need to face the Empire of Illusion created by Mordraneth, and eventually confront Mordraneth, the Stealer of Souls, in a fateful showdown...

... and that's pretty much it. Yeah, as Keith Martin's very first gamebook, Stealer of Souls is notably rather direct and straightforward, having the player going from point A to B to C, finishing with a Final Boss battle. Despite being the 30th-odd entry into the series, most of Stealer of Souls feels like a throwback to the earlier, single-digit installment of Fighting Fantasy, following the standard rules set by The Warlock of Firetop Mountain without any extra STATS or attributes which would later be a Keith Martin's trademark.

Treat it as an experimental piece of work, if you will, or a Genre Throwback to the early days of the franchise; it's a breather of a gamebook which still provides an enjoyable, not-too-difficult challenge for FF-fans.

Stealer of Souls provides examples of: