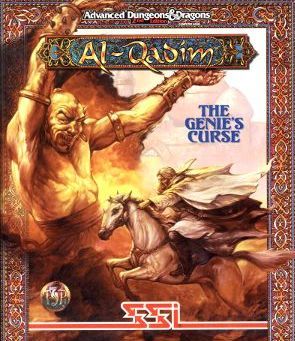 Al-Qadim: The Genie's Curse is an Action RPG set in Al-Qadim, a sub-setting of the Forgotten Realms.
Advertisement:

The plot begins when the protagonist, a son of the prosperous Al-Hazrad family, completes his training as a Corsair and returns home to marry his beloved fiancée, Princess Kara. However, the genie in service to the Al-Hazrads inexplicably attacks the Caliph's ship, leaving Kara missing and the Al-Hazrads facing the Caliph's wrath. The protagonist must clear his family's name, find the princess, and defeat whoever was really responsible.

The game was released in 1994, having been developed by Cyberlore Studios and published by SSI. Al-Qadim differs considerably from SSI's other Forgotten Realms games (such as the Gold Box series), being more action-focused and less customisable. It features real-time combat, puzzle-solving, and occasional stealth.