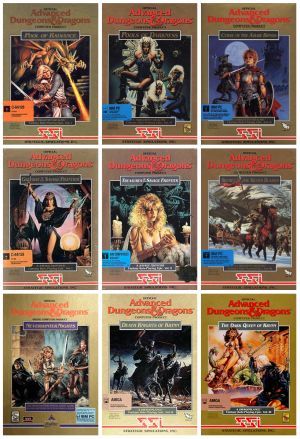 Some of the Gold Box games
The SSI Gold Box games were a fondly remembered series of computer RPGs produced by SSI, based on the first edition Dungeons & Dragons license. They were not the first D&D licensed games, but they were the first to appear in the 16 bit era, when home computers got sophisticated enough to implement substantial chunks of the game system. Their name comes from the distinctive gold-colored cardboard box that most of them came in, and plays on the D&D custom of referring to individual editions by their respective packaging colors (e.g. the very first one was the "white box", the second was the "blue box", etc.). The Gold Box itself was succeeded by SSI's "Black Box" series, better known as Eye of the Beholder.
Advertisement:

The games were based on variations of the same engine and took place in a first person dungeon/city (with some games having an overworld map). Battles were turn-based and happened on a square grid.

The games were collected at various times, the most recent being the Forgotten Realms Archives in 1997, which includes the five Pool of Radiance games and the two main Savage Frontier games, along with other Forgotten Realms-based games. Playing them on modern computers generally requires DOSBox or other emulation software.

The Forgotten Realms and Dragonlance Gold Box games are currently available on GOG.comnote as Forgotten Realms: The Archives - Collection Two and The Krynn Series respectively, with all the "get 25-year-old DOS games to run smoothly and properly on modern comps" fiddling already taken care of.