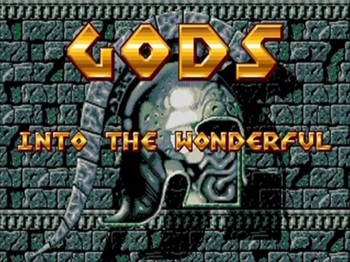 Into, The wonderful.
Advertisement:

Gods is a Platform Game designed by the Bitmap Brothers. Originally released for the Amiga and Atari ST in 1991, it was ported to the Acorn Archimedes, IBM Personal Computer, PC-98, Super Nintendo Entertainment System and Sega Genesis. There is a lost city populated by evil, and by defeating this evil the titular gods will allow you to ascend to godhood yourself.

Unlike most other platformers, the focus lies not on dodging and jumping, but on complex puzzles involving pulling levers, or taking items to the right spot. You defend yourself from the plethora of enemies by throwing lots of weapons (e.g. three spears and two fireballs at the same time).

The game is mostly remembered for its awesome opening theme

which, following in Xenon 2's footsteps, is written by a well-known musician, this time synthpop group Nation XII (the game is one of three by The Bitmap Brothers to leverage on a partnership with Rhythm King records).

In 2018, a remaster of the game, Gods Remastered, was released for Windows, Mac, Xbox One, Playstation 4, and Nintendo Switch. It features both new HD graphics and the original pixel art graphics, which can be swapped on the fly during gameplay, and also a new soundtrack.

Includes tropes such as: