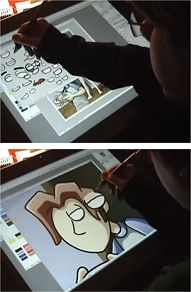 "Cut-and-Paste, Cut-and-Paste,
Pretty art that's gone to waste,
Done in haste,
With lack of taste,
What a waste is Cut-And-Paste!"
— Phalanx, How Not to Run a Webcomic
Advertisement:

So you've gotten really good at drawing your character. Only thing is, you draw him the same way every time. And if you try to change the angle, it no longer looks anything like your original character.

So you draw a few more characters. And have the same problem. Pretty soon you have a cast of five, eight, 12 characters, but only one pose each. Maybe you get lucky and manage three or four poses each. Still, nothing like the range you'd need to draw your own comic, right?

Welcome to the world of cut-and-paste. If you manage to get these pictures onto your computer (or create them there in the first place), you can pop 'em into any decent graphics program (including something as simple as MS Paint) and make your comic. You can create panels, either by hand or in Comic Life

, and put your characters into them, even flip your characters to make it look like you drew twice as many poses. Out comes your comic, ready to publish on your homepage.

Of course, without the skills to pull off those awesome Marvel graphics, you'll need to make up for it with an interesting premise, a well chosen setting and plenty of good jokes/drama. Believe it or not, many do just that.

Not to be confused with Identical Panel Gag, which is the punctual copy-and-paste of panels for comic effect.

Sprite Comics are a variation on the Cut-and-Paste Comic, as are most Pixel Art Comics.