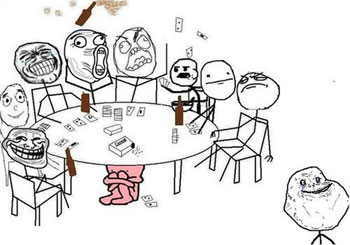 Rage Comics a.k.a. "rage face comics" are not a single webcomic per se but a massive agglomeration of unrelated webcomics by different authors across the interwebs, united only by their distinct style and topics. Essentially a Cut-and-Paste Comic format with a shared pool of recurring face sprites, most rage comics tell short anecdotal stories with a punchline from their authors' lives.

Originating as a collection of anonymous webcomics posted on 4chan back in 2008, the format quickly spread across the web, thanks to its accessibility (pretty much anyone with Photoshop and online access can produce a rage comic within minutes) and the catchiness of many "rage faces". The original rage face was the "Rage Guy"

, to whom the format owes its title. More "rage faces" have been introduced, and by the early-mid 2010s, hundreds of rage comics were produced and uploaded online every day, alongside LOLCats and other memes. While the format has largely died out since 2016, rage comics are still considered an iconic part of early 2010s Internet culture, and some of the characters and formats that originated in them are still used today.

The most common rage comic template consists of four panels (not unlike Yonkoma) arranged in a 2x2 for better browser readability:

Longer comics are also common, but they are almost never broader than two panels in a row (since most websites that host rage comics have a picture width restriction).

Tropes common to all rage comics:

One of the most famous examples of this

One of the most famous examples of this