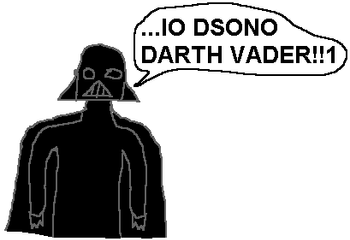 (in English: The adventures of the great Darth Vader) is an Italian webcomic about a dyslexic hacker and emulation nerd who goes by the nickname DARTH VADER (all capitals), always wears a Darth Vader costume, owns a real lightsaber and interacts with other emulation nerds (typically based on actual people who post in the newsgroup it.comp.software.emulatori) by means of jokes about emulation and retrogaming, slapstick and scatological humor. Usually, it has no continuity (to the point that people who die in an episode return in the next as if nothing had happened), but sometimes events that occurred in previous episodes are mentioned.