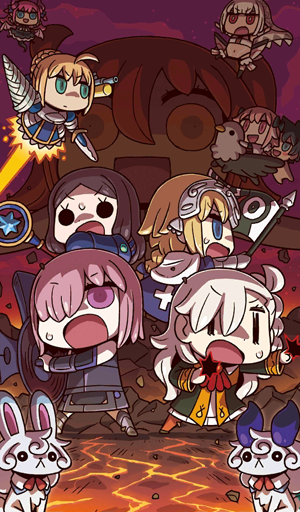 Pictured: The blood and thunder the average Servant experiences when whaling.
Learning with Manga! FGO is a webcomic based on the card battle game Fate/Grand Order drawn by Riyo. While the title claims it's about teaching newcomers the basics of how to play, the main draw is instead the antics of its protagonist, a hotheaded gambler named Gudako who happens to be abusively sociopathic at the expense of her Servants, and her ever-harassed compatriots Mash and Olga Marie, though other Servants and NPCs make appearances along the way. The adventures involve poking fun at some game mechanics and player tendencies as well as the current events of the game.
Advertisement:

Due to the one-year gap between the Japanese and English versions of the game, the Japanese strips remain ahead: in the meantime, fan translations for all three seasons can be found on Gamepress here

The manga has a lot of links with the main game itself: Riyo provides art for Craft Essences depicting their Learning with Manga renditions, announcements and April Fools jokes are commonly done with series gags, and the comic crossed over with the main verse in its "All the Statesmen!" and "Mississippi Mythicizers" events, which saw its original Berserker, Lancer, and Caster canonized.

Tropes associated with the manga: