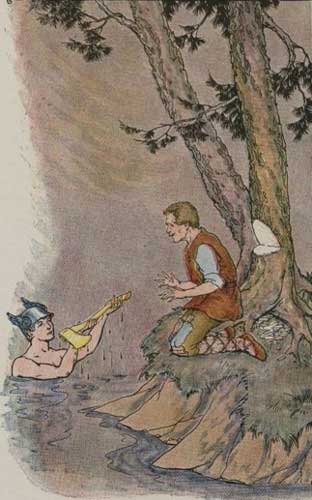 In one of Aesop's Fables (specifically, The Honest Woodman

), a workman dropped his axe into the river. The god Hermes found out what was wrong, and offered his aid. First Hermes pulled out a silver axe, and asked whether it was the one the workman lost. He told the god that no, it wasn't. Then Hermes pulled out a golden axe, and asked whether it was his. Again... no. Finally, Hermes pulls out the original axe. The man says yes, this is his. For his honesty, Hermes gives him the golden and silver one as well. Later, another workman hears the story and tries to invoke it deliberately. But when he claims that one of the axes made of precious metals is his, Hermes knows that he is lying, and punishes him - by not only not giving him the axe in his hands, but also by leaving the original axe at the bottom of the river.

This story has been modified by many cultures with the alteration of Hermes being replaced with a "Water Sprite" or a river/lake spirit, or a more culturally relevant religious figure, such as a Buddha or even God. Anime and manga seem to love spoofing the original, and it is a fairly common puzzle in Video Games, especially Role-Playing Games.

This trope denotes situations where a similar test is given to a character, although perhaps with different results.

See also Secret Test of Character and Stolen Good, Returned Better. Can be played alongside an Honesty Aesop.