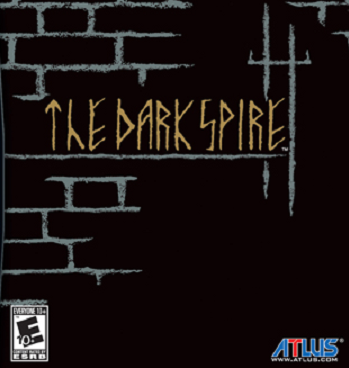 The minimalist box art.
The Dark Spire is a 2008 Wizardry spin-off for Nintendo DS, developed by Success and...
Advertisement:

No, hang on, that's not quite right.

While The Dark Spire is not affiliated with the actual Wizardry series, it is quite clearly a loving Homage to the venerable dungeon crawler. The Dungeons & Dragons-inspired spell slots, endless featureless 3D dungeons (there's even a wireframe mode!), fiendishly difficult encounters that can wipe you out in a single turn if you're unlucky, and the Excuse Plot all make their appearance here. The game even uses Armor Classes instead of a defense stat!

As far as storyline is concerned, there's a dark tower called, well, the Dark Spire. After the King's court wizard, Tyrhung, stole a jeweled necklace from the Queen, he fled to the tower and holed himself in there, where he's apparently plotting... something. A reward is offered to any who successfully reclaim the necklace, and you're just the party of adventurers who're willing to try!

Upon release, the game garnered notice from being an unashamedly old-school throwback, the striking artstyle (thick, dark colors abound with nearly everything being half-hidden in shadow), and the fitting and hummable music. It was localized and published in English by Atlus.

Not to be confused with Slay the Spire.