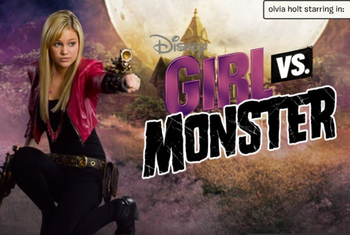 Girl vs. Monster is a Disney Channel Original Movie that premiered on October 12, 2012. The film stars Olivia Holt as Skylar, a teenage girl who is incapable of feeling fear. The plot kicks off with Skylar and her friends preparing for the ultimate Halloween Party, where she is supposed to sing with a local rock band headed by Love Interest Ryan Dean. Unfortunately, that plan gets derailed when her parents tell her she isn't allowed out on Halloween. When Skylar decides to sneakout anyway, she unknowingly unleashes her own personal monster, discovers that she's a fifth generation monster hunter, and experiences fear for the first time.