Manga / Recovery of an MMO Junkie 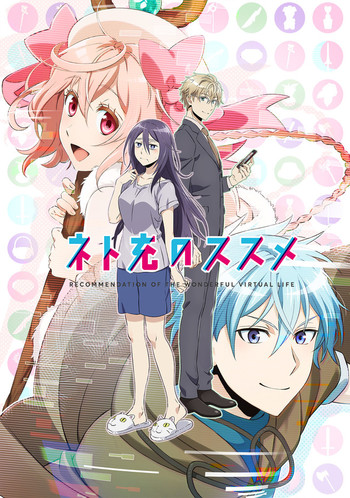 Our in-game and IRL selves
Recovery of an MMO Junkie, or Net-juu no Susume, is a web manga series by Rin Kokuyo. The manga ran on the Comico Japan app from 2013 to 2015.
Advertisement:

The story follows Moriko Morioka, a 30-year-old woman who has recently quit her office job and has become a NEET. Dejected to find that an MMORPG that she played long ago has shut down, and desperately looking for something fulfilling to do with her life, she eventually stumbles upon another MMORPG Fruits de Mer, and decides to give it a try.

Moriko starts playing the game as a male character under the handle Hayashi. After a rough beginning, a girl named Lily eventually comes to her aid and the two quickly hit it off, with Moriko joining soon her in a guild and making more friends in the process. Meanwhile, in real life, Moriko has a chance encounter with a salaryman named Yuta Sakurai.

Has a 10-episode anime adaptation with a special by Signal.MD, which premiered on October 6th, 2017 and is simulcast on both Crunchyroll and Funimation.

On June 30, 2018, it was announced that Comico has ended the manga due to Rin Kokuyō's failing health. Prior to this, Recovery of an MMO Junkie had been on a hiatus since 2015.

Recovery of an MMO Junkie has examples of: