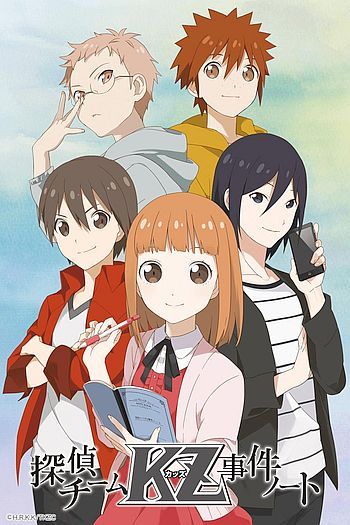 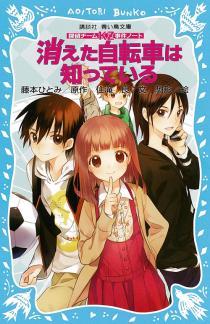 I'm Aya Tachibana. I couldn't have imagined that my encounter with four super-eccentric boys would change my life so much.
— Aya Tachibana, Opening Narration.
Advertisement:

Aya Tachibana is a sixth-grader who frets and obsesses over friends, family, grades, and more. One day, she joins the "Tantei Team KZ" with four very idiosyncratic boys she met at Cram School. There is the glib and attention-grabbing leader Kazuomi Wakatake, the mysterious "expert of personal relationships" Takakazu Kuroki, the smart and stoic math genius Kazunori Uesugi, and the sweet-hearted Kazuhiko Kozuka who is good at social matters and science. Aya finds her place among them as the "language expert." "Tantei Team KZ" gets involved in modern-day cases, and even if they bicker from time to time, they collaborate by pooling each of their talents and skills to solve these cases.

Tantei Team KZ Jiken Note (The Case Notebook of KZ Detective Team) is a series of (35 as of March 2021) tween's mystery novels. It is a remake of Hitomi Fujimoto's 1992-1993 light novel KZ Shonen Shoujo Seminar by Ryou Sumitaki and illustrated by Komagata. The original novels were published by Kodansha since 2011 under the Aoitori Bunko imprint, targeting a upper-elementary audience. It received a animated adaptation by Signal.MDnote A subsidiary of Production I.G that concentrates on CG and family-friendly works; KZ is its first project. starting from Fall 2015, adopting 4 of the novels as 16 9-minute episodes and aired in NHK Education. It is being streamed by Crunchyroll

in most parts of the worldlist United States, Canada, Central and South America (including the Caribbean), South Africa, Australia, New Zealand, Europe, the Middle East and North Africa. It also currently has a manga adaptation by Megu Sakura, published in the anthology Nakayoshi.