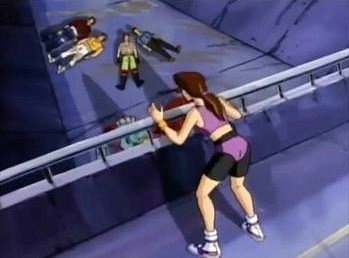 Once Becky started stumbling over mass graves, she decided to take up swimming.
"It's the joggers I don't trust, they're always the ones to find the bodies!"
— Bill Bailey
Advertisement:

The health-conscious analog of Disposable Vagrant. Joggers have a tendency of being the target of Serial Killers, muggers, and monsters in the woods. Similarly, they are also the most likely to discover the victims of all of the above.

Why joggers? Because it can be a solitary activity and this can be played for scares by making audiences relate to the solitude and helplessness when danger strikes. Recent technology (starting from the Walkman days) has graciously provided joggers with means of distracting their ears as well, making them easier targets. Similarly, joggers are drawn to nature and secluded locations, both of which make for good places to snatch victims or dump bodies, and are often out first thing in the morning when everyone else is sleeping in. All in all, joggers in fiction are akin to Red Riding Hood; colorful targets moving obliviously through dangerous places where nasty predators do their work.

A less common variation relates to the other usual outdoors activity for common people: walking the dog. Expect the Evil-Detecting Dog to growl at the approaching danger, get killed defending their master, or run away in fear. It's less common because it doesn't give as good an opportunity for loving camera work on fit moving bodies, and people walking dogs would tend to be older and moving more slowly.

As a Death Trope, there are unmarked Spoilers ahead.