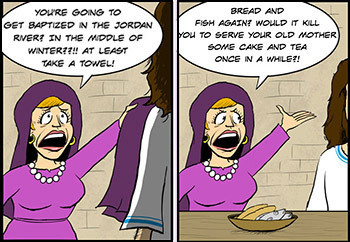 "What would your father say?!"
Maxwell Sheffield: My mother derives sustenance by criticizing everything in my life.
Fran Fine: Yeah? So? Oh, I keep forgetting you're not Jewish.
— The Nanny, "The Passed-Over Story"
Advertisement:

A Stock Character that makes frequent appearances in Jewish comedy, the stereotypical Jewish Mother is overbearing, emotionally manipulative, and persistently interferes in her children's lives long after they've become adults.

Usually, she'll speak with a Yiddish accent (it's worth noting that Jews refer to Yiddish as mammeloshen, literally "mother's tongue") and will often be heard boasting about her offspring ("my son, the doctor..."), when she isn't nagging them. The only option in life for her children is college and (for the girls) marrying a nice Jewish boy (often parsed even more with "A nice Ashkenazic boy" or "A nice Ashkenazic doctor" or "A nice Ashkenazic doctor with an apartment in New York and plenty of frequent flier miles to visit your mother whom you never cawl anymore"). Likewise, a Jewish son is expected to bring home a nice Jewish girl. No matter how nice, however, this girl will not be good enough. Heaven forbid he marries a Shiksa Goddess. And above all, she'll want grandkids.

A related Stock Character is the stereotypical Jewish Grandmother: just as much meddling and interest in the personal lives of her descendants, but more likely to provide them with highly caloric snacks made with plenty of schmaltz (did we mention that being a Supreme Chef is part of the stereotype?). The Jewish Grandmother is the occasional ally of her grandchildren, as she can use on their mother the techniques of guilt and shame that their mother does on them: "Why don't you let the kids play more? Study, study, study all the time is not good for them! And then they're too tired to even visit their grandmother. Are you trying to keep me from seeing them?" "No mama..." "You be quiet! Now bring me that brisket before you ruin it."

Similar stereotypes about mothers and grandmothers are common throughout Eastern Europe, especially the Balkans, and the Mediterranean Basin among Arabs, Berbers, Turks, Greeks, Italians, and Spaniards, as well as among Latin Americans and Asians. On the other hand, the stereotype is seen as uniquely Polish in Israel itself. Apparently, the other Ashkenazim don't think it applies to them — not that there are all that many non-Polish Ashkenazim — and the first-generation Sephardic Jews just saw it as "isn't that just how all moms are?" because their Muslim and Christian Arab or Iranian neighbors had the same stereotype.

Surprisingly, the otherwise northern European Scots suffer... erm... enjoy a variation on this trope with their own mothers. Goodness Gracious Me illustrates that on the Indian subcontinent and diaspora, Hindu and Islamic mothers are also a force to be reckoned with and share many characteristics - overbearing nagging and a recourse to inducing guilt in their adult sons, while stuffing everyone with food. Poles and Russians (and Ukrainians, and Belorussians) are also in the same camp, because, well, Ashkenazi Jews are just as much Poles/Russians as they are Jews - Hell, as mentioned above, this stereotype is considered Polish in Israel. And any mother of an adult character who hails from New York City will come off this way, whether Jewish or not (after all, in New York, "even if you're Catholic, you're Jewish").

Expect a more passive-aggressive form of Jews Love to Argue with her. Heck, she's a master of Passive-Aggressive Kombat.

A Sub-Trope of My Beloved Smother.