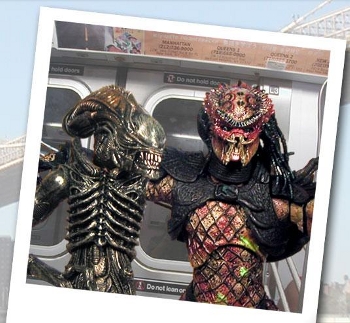 Meet the Cast! (Jesus not present)
In New York, no one can hear you scream
Advertisement:

Ever wondered what Seinfeld would be like if its main characters were an Alien and a Predator and featured a lot of absurdist humor?

... yeah, didn't think so. Even so, it would look a lot like this webcomic.

is a photo webcomic created by Bernie Hou that revolves around the strange lives of Abe (the Alien) and Preston (the Predator), portrayed by Alien and Predator action figures. Contrary to the adversarial nature shown between the two species in a certain other franchise, these two are best friends and roommates living in New York City. Equally contrary to what you'd expect, their lives are amazingly mundane, causing several jokes to rely on observational humor centered around aspects of day to day life in NYC, which has granted the strip several comparisons to Seinfeld. Of course, every so often the inherent weirdness of the strip's universe kicks in, leading to stuff like a talking tattoo of William Hung, a sentient smell, time traveling Chinese takeout deliverymen, among others.

It stopped updating on June 2, 2011 and is currently on hiatus due to the writer dealing with another project before continuing the series. As of January 2019, the series is dormant, and likely will not continue.

The strip doesn't have much of a supporting cast, though they often play big parts in story arcs. This cast includes Corinne, a psychic whose "blurry second sight" leads to inaccurate predictions, Abe's mom, an (of course) Alien Queen that doesn't think much of her son and Jesus Christ...as a star baseball player for the New York Mets.

...yeah, it's a weird comic. Pretty funny, though.