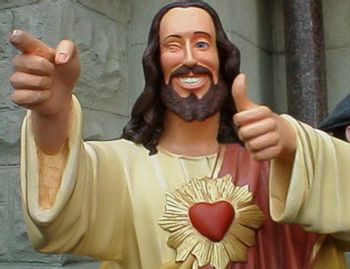 Who's awesome? You're awesome!
"Jesus was way cool
Everybody liked Jesus
Everybody wanted to hang out with him."
— King Missile, "Jesus Was Way Cool"
Advertisement:

As any religious scholar will tell you, Christ said many things that were profound, inspiring, and uplifting, but He wasn't all too entertaining... or was He?

It's an interesting phenomenon: Jesus is generally presented as an admirable figure, or at least benign, even in non-Christian or anti-Christian media. Atheists, Jews, Buddhists, cynics — anyone who might author stories unflattering in their portrayal of the Almighty, The Bible or religion in general — are nonetheless complimentary to that Nice Jewish Boy. This can be used as a Take That! to Christianity ("Jesus was cool even if his followers all suck"), but also as a Pet the Dog moment from a character who is otherwise portrayed as villainous and/or hostile to the status quo ("Even Bad Men Love Their Jesus"). This makes sense, in a way. Jesus was supposed to be God in mortal form, and as such, having a sense of humor is possible, if not probable.

This is not always received well. Portraying Jesus as a cool dude can somewhat dent his gravitas as a religious figurehead, and as a result some Christians can get offended by (what they consider to be) the trivialization of their Lord and Savior. There's also the fact that Jesus is a figure in Islam as well, and general Islamic sentiment is that prophets are sacred and should not be portrayed. Others may note that Jesus is Way Cool because he happens to agree with the writer on all sorts of subjects, even those where all the evidence is the other way round. On the other hand, when employed in works that try to play up Christianity as being "cool" by association, it generally gets a free pass. Always remember that tropes are neither inherently good nor inherently bad, just tools.

The trope is usually associated with atheistic former Christians who are attempting to dissociate themselves from Christianity, but still have issues with it, and therefore need to view/depict Christ as a sympathetic figure, in order to obtain integration, resolution, and catharsis; Kevin Smith's example (from Dogma, as shown in the trope photo) is quintessential of this, as was South Park's attempt to basically include Jesus as a member of their community. In these cases, it can overlap with God Before Dogma: their issue isn't necessarily with the Lord Himself, just with religious doctrines or practices done in His name.

Nevertheless, the trope actually does have some genuine theological support insofar as Jesus tended to associate with the outcast and marginalised members of society, like prostitutes, people found guilty of adultery, tax collectors, and various other types who were considered unsavoury by the religious authorities of the day. He also had a pronounced anti-authoritarian streak, regularly calling out religious leaders for hypocrisy and acting Holier Than Thou. Several portions of the Bible also portrays him as master of the Verbal Judo and an expert in Shaming the Mob, which undeniably gives him an air of being an accomplished Badass Pacifist. And last, but certainly not least, there are also the facts that Jesus' whole ethos is bound up on the idea that he is the ultimate All-Loving Hero who will offer Forgiveness to all who willingly seek it, no matter how great their crime or transgression, and that is his whole mission is being The Paragon who will lead humanity unto a better path. These are all traits that are highly likely to find Values Resonance across time periods and cultural differences. Study of the New Testament (and the non-canon Gospels) will tend to show Christ as much less severe than he is sometimes depicted by certain church authorities, who have been known to (ironically) misuse his words with an eye on political and social control.

A character-centric Sub-Trope of Unacceptable Targets. When Jesus surpasses "way cool" and delves into "Freakin' Badass", that's Kung-Fu Jesus. Compare and contrast Jesus Was Crazy, Hippie Jesus. When cool people express admiration for him, it's a case of Real Men Love Jesus. When people philosophize about imitating him, it often overlaps with What Would X Do?. A supertrope to No Such Thing as Wizard Jesus (Jesus is always special, even if there are individuals In-Universe who are capable of matching or exceeding his own supernatural feats) and No Such Thing as Space Jesus (one part this to one part Humans Are Special).

Compare God Is Good, which is similar to this trope but more focused on The Father or the whole Trinity instead of just The Son; the third leg would fit under Humans Are Good. Compare Everybody Loves Zeus, where they focus on various other divine beings of light and the heavens. Compare Not Christian Rock where a normally or nominally non-Christian song or musician sounds like it could be religious or appreciative of religion. Sub-trope of Periphery Demographic, since it involves non-Christians who nonetheless admire Jesus and his teachings despite being non-Christians.

Contrast Jesus Taboo, where He may be special but we never find out because people avoid mentioning Him.